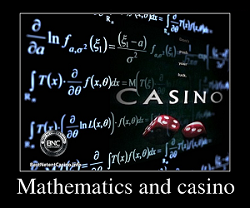 In this article, we will talk about the connections between mathematics and casinos, as well as how they are always winning and do they lie on the luck. You need to know that most of the casino games were developed by Mathematics, so do not be surprised if you realize that not everything is luck when gambling. Can we use their calculations to get an advantage over the casino? Read the article further and answer yourself.

A piece of History

In 1526 Italian mathematician Geralomo Cardano was the first one who wrote about mathematics at the dice game in his book "Book on Games of Chance". After a lot of time spent in practice, he tried to make a bet management recommendations based on his experience:

"Probability theory is concerned with determining the relationship between sometimes when some specific given event occurs and a number of times an event occurs."

Later, at the end of the 16th — beginning of the 17th century, the same mathematical analyses for the dice game was continued by Galileo Galilei and Blaise Pascal. A friend of then (big gambler) asks them to help him. You need to know that the theory of probability grew because of the gambling problems of a player.

It is commonly believed that at that time the whole new branch of mathematics was born, wholly dedicated to probabilities. The next step in this direction was made by Dutch mathematician Christiaan Huygens, who published a book in the middle of the 17th century "On Reasoning in Games of Chance" ("De Ratiociniis in Ludo Aleae"). The further development of the probability theory was done in the writings of many great mathematicians of the 18th-19th centuries – Jacob Bernoulli, Poisson, Laplace, Moivre and others. Very soon a new theory became widely used in the spheres which are entirely different from gambling.

Mathematic at the slots

How do the probability and gambling theories work? Let’s try to find out if there is a connection between mathematics and gambling. At a coin toss, any of its sides have the same probability of dropping. So, we have one of two outcomes – heads or tails. The probability of getting heads is ½ (50%) so half of the tosses will be heads.

The probability is how often an expected outcome may happen, and it is represented as a ratio of expected outcomes of the total possible outcomes at a large number of retries within an extended period.

If we are talking about win/loss ratio and mathematical expectations, the first thought is connected with the casino, so let’s try to explain it:

One of the simplest things for the players in gambling is the mathematical expectation (expected value). For the normal brain, all the described examples are very confusing numbers, but for the gambler's mind it is all about money, that's why they understand the examples much more comfortable because they connect the numbers with money.

Thus, within a long period your loss will be 50 cents for every dollar bet, so, according to the mathematics, 4 spins will make you lose three times, 1CAD each (you get a loss of 3CAD) and win a single time – 1CAD.

Let us take American roulette again, which has 36 numbers and 2 zero sectors. Suppose we bet on a number. In this case, the probability of a win is 1 to 36:

Dispersion and mathematic at slots

In mathematics, the dispersion is a statistical measure that tells you how measured data vary from the average value of the set data. In our case, it is a risk degree. Being used in gambling, the dispersion is the deviation degree of the outcome from its mathematical expectation. The dispersion makes the game unpredictable, you either win or lose.

The gambling houses exist thanks to the dispersion: any result would be calculated mathematically. The dispersion is neither a positive or negative factor, and it exists by itself as an objective reality. To some extent it compensates negative mathematical expectation, allowing the player to win (at a short distance). At the same time, it is impossible to create a successful strategy for winning in the long term

It should be noted that when betting on "colour" the dispersion in roulette is almost absent. In practice, however, there are records of 15 straight droppings of the same colour. Learn more about dispersion in the following articles:

If the probability of events is identical, it does not mean that we will get such an outcome from now on. Suppose we toss ten coins at the same time. It is logical to expect 50% of tails. However, the probability of getting 60% or above is quite high. This is thanks to the dispersion we talked about earlier.

That is how the "law of large numbers" works: the accuracy of the expected outcome ratio (according to the probability theory) is higher when we have a larger number of events. By using this law, you may accurately predict only the outcome of a series of similar events. Although the outcome of each event is unpredictable, it is balanced at a long distance.

How to get a positive mathematical expectation at the casino?

On our site, we have a list of strategies and recommendations that can be used to get positive mathematical expectation. It is based solely on mathematical calculations, taking into consideration the payout percentage of each of the slots and the betting requirements of the bonuses. Find out more on the following page:

Playing at a Canadian online casino is very easy; you don’t have to be very good at mathematics. You don’t even need to try to calculate the mathematical expectation or dispersion; it was done a long time ago. You just need to realize that the casino games that can bring you a positive mathematical expectation need to be your first choice when starting your gaming session. Play at European roulette (with a single zero sector), here the casino advantage is 2,7% when at American roulette (with two zero sectors), it is 5,26%. Do not forget to find a game according to your playing style. If you are looking for a game without risking too much, then find games with lower dispersion, higher dispersion games can bring you higher stress. Remember that mathematic in casinos can be calculated for the long term, in a short period, can happen everything.