About the Playtech Company at Canadian online casinos 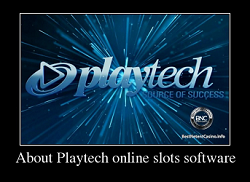 With over 600 different games across multiple channels, Playtech is one of the most well-known providers of online betting games. Poker, Slots, Table & Card Games, Live Dealer Games, Lottery, Bingo, Scratch cards, Sports-betting, Virtual Sports, the company offers them as an instant play or as download integration.

There are a lot of controversies hovering Playtech’s overhead. Here are some of them:

Company Playtech (1999) and Company SafeCharge (2006) - global payment services and fraud prevention firm, is a travesty on itself - because Sagi had a prison sentence for bribery and security fraud himself, and yet his company is established to provide solutions for fraud protection.

About the Playtech Software

Playtech Company has generally acted very conservative in their business.

Some narrations are circulating about the “unspoken Playtech bylaw” prohibiting software junction or work integration of Playtech unit casino with any other manufacturers. That will say the casino may be either packed with only Playtech slots or any others but no Playtech’s.

Only recently Playtech started to approve multi-platform online casinos. The business model Playtech follows the last 10 years is aggressively assimilating big “gulps”- other important software and game developers, which the firm proudly names consolidations. For all the observers these acquisitions were nothing but a solid measure in the hope of brand-popularity awakening and brand-innovation revival. The deals mentioned are the bellow procurements:

This article might be interpreted by some as a conspiracy theories against Playtech, but please accept that we only want to shed the light on some important for the players’ and readers' actual Playtech brand elements and we are attempting to keep abreast of the online gambling forums trends.

Besides the inferior quality of Playtech slots, the general opinion is that many of them “can easily eat your balance”, some are even called “huge rip-offs” and require “truly fat bankroll, or a very very lucky day!” So, no surprise when the players receive advice to choose any slots from Netent, Microgaming, PlayNGo, NYX, Novoline, or Yggdrasil instead.

Specifications of some popular Playtech Slots:

Famous slots of Playtech the last few years are:

The features of Playtech Software

Many players identify the sounds and graphics as “cheap and tasteless” with some “inelegant and shabby” bleeps. Predominantly Playtech slots have fewer good qualities and very many defects.

Even the latest releases: (Aug 2020) - Legacy of the Wild 2, and Pearls Pearls Pearls, in the rigorous qua originality and design slot graphic business can be only considered as acceptable, but not amazing!

Note- The quality of the slots from the sub-divisions Quickspin and Ash Gaming are subject to other articles and don’t apply to the harsh words above- expressing mediocracy.

Playtech has a grip on some large entertainment licenses for movies, TV, and pop culture themed slots. This includes titles like The X-Files, Marilyn Monroe, The Mummy, and King Kong.

However, contrary to the humongous (500+) amount of slots released by Playtech, the developers can hardly surprise the players with other than common themes and tolerable substance (with the exception again from the releases by the subsidiaries Quickspin and Ash Gaming, showing more creativity in their game subjects).

Ever since Walt Disney Empire began considering (2009) to pull the plug on the Marvel-themed slots it all went downhill for the Playtech advanced development. The final date was on the 21st of March in 2017, when the family-oriented Disney Company definitely disengaged all the popular Marvel characters - Thor, Hulk, Captain America, and Iron Man from the gambling industry. So for the time being, gems, animals, mythology (Age of…), and once in a few years Justice League Comic subjects will be all, that players can get from Playtech.

Each game offers a comfortable array of the usual wilds and scatters, just to keep things on the agreeable and interesting side. Most Playtech games even include free spins and second screen bonus features. Some other consist of doubtable elements like the strange Mr. Cashback feature. If on some of the active pay lines you did not win for 50 times in a row, you get your money back for that pay-line. (Sure, this never happens as three of a kind is inevitable not to occur, so the question is if this unusual idea for a slot feature has some hampered relation to the game RTP?) The players mainly think that except for some very good payouts in certain lucky situations, there is not much to praise Playtech’s slot with.

The return to a player percentage (RTP) for Playtech’s online machines varies widely - from 90% to almost 97%. Here are some examples of slots with high RTP: A Night Out, Wall Street Fever, Captain`s Treasure, Cinerama, and Football Fans. If one investigates the percentage of all online Playtech games he can see - they are seriously below than of many other games. In fact, figures around 90-92% are not uncommon for Playtech. Don’t think that this is just a few points less than the 96-98% offered by some other software providers (NetEnt, Microgaming). No, that is much low- if you are just placing a small deposit, this is exactly why you will find it lasts much less time into Playtech slots than in another game with higher RTP.

The Playtech produces machines with all types of dispersion of winning: low, medium, and high. The biggest group is the one with medium dispersion- for example, Pink Panther, The Punisher, The Mummy, Desert Treasure, and Dirty Dancing, which provide low to mid-sized payouts, but more frequently. Examples for high variance are slots like Haunted House, Man of Steel, and The Mask of Zorro, which provide a rare but huge win.

Playtech's table games are generally well-executed, fun to play, and assure smooth gameplay. Along with the standard Blackjack, Roulette, Baccarat, and Caribbean Stud, Playtech offers a few games which are unique for their operators like Wild Viking(similar to Roulette)and Stravaganza(similar to Blackjack).

Playtech has created some good as well as some plain with unexceptional quality slots. It licenses its software to some large and reputable casinos, along with many others of immoral credibility. Some Playtech games are exciting and fun and provide the potential of an enormous jackpot win. However many of its licensees are imposing extortionate withdrawal limit policy on progressive jackpot wins. So, make sure you do your research and stay away from casinos of the blacklist!

Play all casino games for free