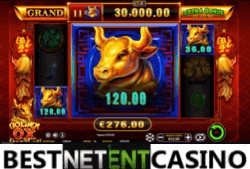 Ainsworth developer company has released the most original slots recently. Be sure to launch Golden OX Golden Cash slot. It is dedicated to the Chinese theme and has a number of innovative features that increase the chances of winning. There are five reels here. Three rows of symbols and 25 fixed pay lines. The percentage of return is set at 94.13%. But the best part is a set of bonus features. There are several special symbols that are responsible for triggering additional features. You will be able to launch the free spins, in which each player has a chance to win one of three progressive jackpots. Re-spins are also available. They are offered to reach the super prize — the grand jackpot. As you can see, the number of bonus features is amazing. So be sure to learn all the rules of the slot.

Golden OX Golden Cash slot was released in December 2018 by Ainsworth company. This is a regular-sized 5x3 slot with 25 bet lines. Here you will find three bonus features and the opportunity to get one of the four jackpots. In the usual spins, you can get a maximum payout of 400x thanks to the stack symbols including the wild. Three bonus features, four jackpots, stack symbols, all this is surely good, BUT I can not even remember the slot that is as bad as this one. It looks like the developer company was in a hurry to complete this slot, and then they did this “monster”.

Graphics, Yes, it is very good and modern, but apparently because of this it often slows down. Returns – ZERO. I made about 500 – 600 spins, the biggest win was 31x total bet and it is not in the bonus feature. With bonus features, there is a different problem. There are three of them: free spins, the so-called bonus "Golden Link Feature" and almost the same third bonus "Extra Bonus Golden Link Feature". The last triggers randomly during the usual spins. Free Spins Feature – triggered quite often, of course, nothing very good happened there, but they have a game plan, the more bonus-wild symbols fall on the reels, the bigger jackpots you can get(they are shown at the top of the screen).

The “mini” is paid from 4 or 5 bonus-wild, then from 6-7 ”minor”, 8-9 “major” and 15 bonus-wild will give the “grand” jackpot (bonus-wild, not to be confused with the usual wild symbol). Yes, but the bad thing here is that I have several times dropped 4, 5 and 6 bonus-wild symbols, but the slot for some reason decided not to pay anything from the jackpots. The second bonus "Golden Link Feature" is triggered when 6 or more symbols with the symbol of Bull with cash prizes are drawn, so you will get tired of waiting for it. Here in the 600+ spins and it happened once, was the matter of pride to catch it, but all in vain, the feature gave me 5x total bet. What's there to say?! Return to player percentage 94.13% of the slot speaks for itself. Oh, Yes, even if you get lucky somehow and win, then you have to watch the entire multiplier on the reels falling to the end, because if you click on the begin to speed up this process (as in all normal slots), then the next spin will instantly be triggered, and you will only have to guess how much you won there.

And last but not least, the one who will understand how to trigger the “auto-spin" feature, in my opinion, developers should give the "Nobel prize", well, or at least another high prize diploma. In the end, I would like to advise you only one thing, Run from this slot, do not lose your time and money.

Free Games bonus is triggered when 3 or more scatter symbols appear. You will receive 8 free spins, during which jackpots can be won: Mini, Minor, Major, and Grand. The size of the jackpot depends on the number of bonus-wild symbols: