5 of 5 - 1 votes
Thank you for rating this article.
Play for real money Play all Netent slots for Free 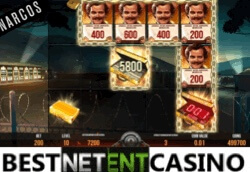 Narcos slot from NetEnt company is devoted to a detective topic. It is able to give a jackpot of more than 600 000 coins. You can get a lot of rewards in pursuit of dangerous criminals. Pay lines are formed on 243 ways at this online slot. Numerous bonus features are available here. Such as special features, non-standard games and free spins. Next, you need to learn detail information about the rules of the game and read our feedback before playing at Narcos slot to get the maximum wins. Moreover, you can trigger a demo version of this machine and get acquainted with all the features of the game process.

Review and recommendations from the testing team

The maximum payout so far is only 350+ bets, which, in my opinion, is still not the limit for this slot. Narcos is good for playing for the bonus money. While playing for real money, it is worth doing medium and long distances of spins with a betting range of 150-200, as slot rarely realizes its potential when the distances are short. Progressive bet strategies are possible.

Play all Netent slots for free