4 of 5 - 1 votes
Thank you for rating this article.
Play for real money Play all Quickspin slots for Free

You can play Dragon Chase online slot machine for real money in the following Quikckspin casinos: 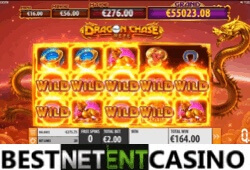 Try Dragon Chase slot from Quickspin developer company, which is dedicated to the Asian theme. Despite the small range of bets available, you can win up to 80 000 coins per spin. The slot has more bonus features to increase the chance of winning the maximum reward. So, you have the option to get “Wildfire Symbol” feature, free spins and “Dragon Pearl” symbols (awarding the GRAND jackpot). Further, there is detailed information about bonus features and payouts.

Review and recommendation from the testing team

Dragon Chase is not recommended playing with active bonus wagering. While playing for real money, long distances of spins are also not recommended. It will be a bad strategy to wait until big payout or the grand Jackpot is awarded because this will most likely lead to balance loss. Only short and medium distances with 2-3 of the bonus features triggered with a potential winning of 50x-200x bets are recommended.