You can play Durian Dynamite online slot machine for real money in the following Quikckspin casinos: 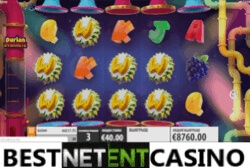 Quickspin developer team has this original Durian Dynamite slot. It has a good bonus feature that should be known. So, the game is played on 20 fixed lines. The maximum bet per spin is 100 coins, allowing you to hit the maximum winning of 100 000 coins. And now about bonuses. Those are "Dynamite Launch Feature" and free spins feature. So read the review, learn the rules, test the slot and leave your comments.

Dynamite reels and 10-12 free spins, the win was only 6x-18x total bets. However, during the tests, it was still possible to get a bigger win of 160+ bets with the combination of much worse, with minimal winnings (3 Dynamite Wild +1 Dynamite reels +11 free spins). The developer recorded three wins of 209x with the same set of features 4 Dynamite Wilds + 3 Dynamite reels + 11 free spins. The maximum winning recorded by the developer has so far reached only 239x total bet, which can probably be called almost a real maximum of the slot. Despite the colorful and interesting Durian Dynamite slot, I do not recommend you to play the game for bonus money. While playing for real money, it is not recommended using a strategy of progressive bets, as well as long gaming sessions.

This is a regular slot from Quickspin company, it is not something special. This slot gives little but can do it very often. For a long time, I could not trigger the bonus feature. The bonus is triggered while playing at high bets, a little less often when choosing small bets. But the average winning did not give much, some prizes up to 20x. As a result, I still managed to take away at least something from it, triggered the bonus feature and got more than 300x total bet, which is very good for Quickspin Slots. Well, in general, Durian Dynamite slot is quite suitable for playing for real money.