You can play Golden Glyph online slot machine for real money in the following Quikckspin casinos: 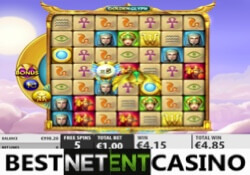 A huge number of slots on the theme of Ancient Egypt have been released by developers, with each game having its own features. But Golden Glyph slot from Quickspin differs from many other providers' offerings. After all it is endowed with original functionality, after all the playing field has size of 7x7, and payment combinations give five or more symbols that formed a cluster.

A special Power Ups feature that triggers wild symbol produces four bonus features. They are capable to pay the guaranteed remunerations and to increase the probability to catch the main jackpot in more than 1,000,000 coins. But this prize is available only while playing at the highest bet. The following is detailed information about bonuses, so read everything carefully. The probability of breaking the main bet while choosing real bets will increase in times.