You can play Joker Strike online slot machine for real money in the following Quikckspin casinos: 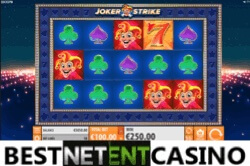 The well-known Second Strike slot has long been popular among the fans of slots. That is why Quickspin company presented Joker Strike slot, which is a clone. There are also 5 reels and 10 pay lines. And there is a special bonus feature that is triggered after each winning spin. The biggest payout is up to 100 000 coins when you get your best luck. The developers have put a special feature called Hi Roller. In the usual spins, the percentage of return(RTP) is set at 98.11%. When you trigger the "Highroller", it increases RTP. Further about everything in detail.

Joker Strike is not recommended if you play with bonus money, because it is bad at keeping the balance. While playing for real money, I would recommend only short gaming sessions in an attempt to get a well-paid combination, as the slot rarely releases its potential.

After each winning spin, a special feature is triggered. The symbols that gave the maximum win will remain on the reels. A special block with a slider is placed around the playing field. If it stops at the symbol that is frozen on the reels, the bonus is triggered. Depending on the number of dropped symbols, there are additional symbols of the same kind. After that is summarizing the winnings. For example, the combination of three symbols will give another 6, four and five symbols will bring 8 and 10 additional symbols.

There is a special button on the control panel of the slot. It's called “Hi Roller”. You will see three special offers. For an additional fee, you can make five spins with special features: