You can play The Grand online slot machine for real money in the following Quikckspin casinos: 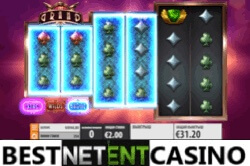 We present to you The Grand slot from Quickspin company. It has a non-standard field, the size of 3x3x4x4x5x5, and an unusual number of pay lines — 241. The maximum bet per spin is 100 coins and the payout for six symbols is 800 coins. Free spins with bonus features are also available. You can find information about bonuses, winnings and our review and recommendations from an experienced testing team. Our expert told us how to avoid losing. By the way, RTP in the slot is 96.58%.

The Grand slot is very good at keeping your balance, that is why it is recommended playing with bonus money. While playing for real money, I would still recommend only short and medium sessions. It is not recommended using progressive betting strategies in The Grand slot.

The Grand slot is probably the worst Quickspin slot I've ever played. I really did not like it. Despite the fact that the slot has 214 pay lines, because of the unusual type of the reels, the winnings are not very good. You will have to wait for the free spins feature a long time, and the result will often be no good. During the free spins you can trigger 3 bonus features: synchronization of two reels (Sync), random wild symbols (Wilds) and spin the reels (Nudge). To trigger them, you need to catch the symbol "bonus" on reels 3, 4 and 5. When you get to trigger 2 of the “GRANDomizer” features, they are simply not helping each other. Often when playing free spins feature the Sync or The Nudge is making “Bonus” symbols go away. Wild symbol in this slot is shown only when you have triggered “Wilds feature”, so it will not be often in play, and that is why the payouts are often very small.