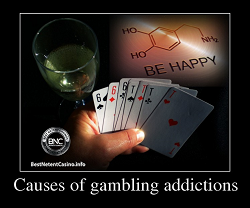 The results of the study done by a team of British scientists allow you to answer the question regarding the pathological players. It turns out the category of persons who get hooked on gambling, has some features in the structure of the brain that is not, in principle, a medical pathology, but cause many problems to their owners. So, what is the cause of game addiction? Is there a gene or pathological feature of the brain at the people with pronounced gambling addiction?

Study on the causes of gambling addictions

In the experiment, which involved thirty people (15 players and 15 people with no gambling) was conducted positron emission topographies aimed at studying the receptors responsible for the release of endorphins known as "happy hormones." In addition to that, the receptors have a significant influence on the mood; they also reduce the pain threshold, which in itself is also essential. It was found that there is a clear correlation between the number of endorphins and gambling (game) addiction.

Previously, it was proven that such receptors are significantly more with drug and alcohol addiction. But in this case, the numbers of receptors of the two groups taking part in the experiment were virtually identical. However, the brain of gamblers, at its structural features, provided much less "happy hormones", compared to the mind of the healthy people.

As you know, the human body is a self-regulating system. Place it in unfavourable conditions for long periods of time, and if it doesn't die, it will adapt to new situations. The protective reactions are also present in the case of gambling addiction. The more intense emotions get the brain of the gambler, the weaker it responds to weak stimuli. This is the main problem. Gambling is similar to drugs. See how it works:

It is understandable why people continue to play at casinos, despite the many setbacks — it is because their brain demands maximum emotion to experience the feeling of euphoria. Gambling addiction - is not recklessness; it is a disease that requires qualified medical treatment.