RNG and pRNG at an online casino 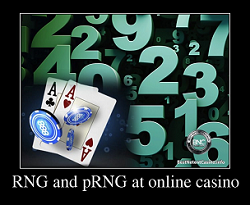 "Random Number Generation is too important to be left to chance"… This is a quote from Robert Cove, which has to be considered. That fact entirely drives our life, and many online and land-based casinos exist thanks to that. Any modern gambling house is entirely depending on the true RNG. If RNG is false, everything goes down the drain. Furthermore, any game could be hacked, and the scammers would hit big wins. The most exciting part is that all online casinos don`t have a true RNG, but pRNG – pseudorandom number generation.

I was quite shocked when I found it out. For what sake, such well-known companies would use a false generation? Is it safe? Doesn`t it contradict with the random Roulette spin or random distribution of cards that the casino should use? Yes and no. pRNG – quite a dominant part of the software, is constantly generating by random numbers. But be aware, it does not work as it is supposed to. Instead of generating a random number, it creates one, based on an algorithm.

What is true RNG?

Can pRNG be hacked?

Is there any way of managing the winnings?

How did the old slots work?

If the creation of the perfect conditions of a true RNG is not so easy, then how did the old slot machines work? In reality, it is not so difficult to get a series of random outcomes. Casino Roulette is out there for a reason. The croupier throws the ball, and that responds to the physical laws, and still, you cannot know the exact outcome. On the other hand, that outcome would not be 100% random (as the quantum phenomena are).

However, that is quite enough. The first slot machines worked the same way. Being mechanical, most of the times, they dropped random outcomes. You could cheat by using their bugs, but here they come – slots – with fixes and improvements. There was a long way in the creation of an electronic device which would work like a mechanical one; a special focus was required while converting the random system—time for handy RNGs.

How does modern pRNG work?

Once the Spin button is pushed, the outcome has been already chosen. RNG was activated, and a series of numbers has been selected, which denotes a specific position of the reels. However, the slot behaves quite differently. It makes you think the opposite until the last moment – the reels effect.

You may be a little bit disappointed about that fact, the slot may lose a bit of its magic, but still, the outcome is always random. By the way, the result of free spins is also chosen in advance. At the moment, you pushed the Spin button. Again, there is nothing weird. The slot knows the outcome, but you do not. That is the catch. Speaking of that, you better avoid such thoughts and pretend to play in a beautiful world of gambling.

Who is responsible for RNG?