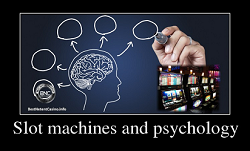 The natural waves and game outcomes. The wave theory of the winning. The feeling of revenge at the slot machines. What all of these means? As well as signs, rules, questions and answers, the mathematical deviation at slots, life stories about the casino in general. We are going to discuss all of these below.

The gamblers develop new rituals of winning. In this way, they feel safer and more confident while playing at slot machines. Rubbing the horse, so that it runs faster, laughing at the tomato which talks to you when the bonus drops. You need to press 12 times on the button and Bet 4 times the maximum bet, then double down, all these to get more free spins. You can also press the button as quickly as possible to confuse and beat a slot machine. Without looking at the screen during a spin or bonus and any other methods that you will get lucky and finally will be the winner. Like it or not, our minds trying to develop a system and create dependence on external factors and events. Many serious players believe that their psychological state (courage, sadness, despair, confidence in the victory) has an impact on the results.

Our staff had a saying: "Do you know why the machines are called machines? Because they beat the players like real machines".

The slot is configured so that it makes a guaranteed profit for the owners (excluding the failures and the outside impact on the software). The psychological state of the player has nothing to do with this and any of its actions.

If the slot return percentage (RTP) is 98%, despite everything, at a certain distance (billion of spins) the house profit will be exactly 2% of bets made. However, players do not believe in common sense or logic, and they do not want to see the hopelessness side. They come up with all new systems, rituals and tricks. They want to believe that there is a secret, a method.

My story of slots plays

A few years ago, I worked as an operator administrator at a prestigious casino. There were quite expensive slot machines, but they were not up to the Net Entertainment quality. So, I even managed to make new friends among the players who seemed to be quite balanced.

Thanks to these people, of entirely different mentalities and social status, I learnt a lot of things and finally understood what drives them — the game passion.

For example, one of the players once told me such a thing: "I can control myself when I get a winning, but it is a different story when I am losing". Gambling psychology has such a thing called the feeling of revenge. It forces the players to come back again and again. It is the psychology feature which makes the slot machines more "luckier".

Several years ago slot machines were not popular. The serious players preferred the games with live dealers: roulette, blackjack, oasis poker, – reasoning their choice by the fact that the slot is a program and it decides the outcomes, and the probability of getting a win is quite impossible (even if there is a small chance). But let us have a look at the Netent slots.

The average NetEnt slot return is 97%, and the dispersion is so high that during a bonus game, the 100 Euros wager is multiplied by 700 times with no problems at statistics.

So, the Netent slot return is higher than at roulette, and thanks to it, here it is more profitable to play at high stakes than at most board games.

By the way, there is a phenomenon in the casino – no matter online or land-based — the first time is always a win or in other words, the "beginners luck". That is how the slots draw the attention of the players; they are real one-armed bandits.

Quite often, the player who plays first wins the game. If there were a loss – he would think that it is not worth his time, where he loses money, and he better stops doing this.

You may tell me anything about mathematics and statistics, but I firmly believe that there is something more in the casino magic. And this "something" is quite often the player who wins or loses, is it lucky or not, it is not about statistics, it is a different phenomenon. Many players believe that an individual impact comes from mental attitude.

For example, at Mega fortune slot machine, two jackpots were won by the same player. Imagine the chance to win a jackpot is 1 out of 10 million. What is the probability that a player will win it? Unfortunately, I do not know such a large number. The possibility is the indefinite value which tends to zero.

Now let me take another real-life example. In the recent past, there was a player who was playing via our partner links. He was playing exclusively with us; – we guarantee the account safety and the withdrawals of big wins. By having a bad experience with Microgaming (its reputation is long behind NetEnt), he decided that it would be safer to play at honest casinos (like Fastpay).

Most of the time was spent at Jack Hammer slot machine, and he was wagering the maximum bet of €250 per spin. It was the most popular game at best Netent online casinos. Within six months he won €50,000 per month, and statistically, it was just luck. As a result, he earned about half a million.

The money has been paid without any delay. Imagine the values of the dispersion (statistical deviations), which include the х2,000 win via  €250 stake. You may get this at Netent casino only.

Caring about the psychological state of the players

The European operators are guided by the principles of caring about the players, their mental problems; they give to the players the opportunity to set deposit, stake, overall loss limits. The setting of your own limits does not allow you to lose more than you can afford. According to the license requirements, the limits may be changed only after seven calendar days. Thus, by increasing the restrictions today, we will be able to change them just after a week. During this time, the player may balance his psychological state.